The GLAA and Skills and Education Group have been honoured for their work in combatting labour exploitation. 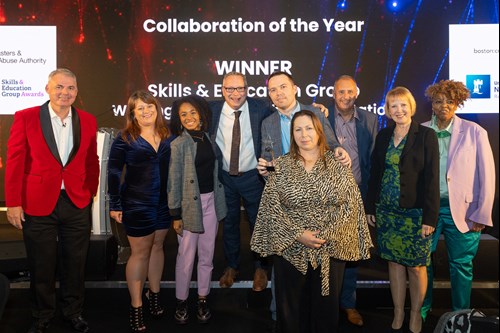 The Skills and Education Group has won the Collaboration of the Year Award at the FAB 2022 Awards hosted by the Federation of Awarding Bodies.

The Group received the award for its work to prevent labour exploitation in collaboration with the Gangmasters and Labour Abuse Authority (GLAA) and various other agencies.

The Level 1 Award in Workers’ Rights and Labour Exploitation was developed by Skills and Education Group and the GLAA, along with the University of Nottingham’s Rights Lab and Boston College, to bring the topic of workers’ rights into the UK curriculum for the first time and to help individuals protect themselves from labour exploitation, a branch of modern slavery. The development of the qualification was supported by funding from the Home Office.

The qualification underwent an initial pilot phase involving learners from Boston College, before launching in early 2021. It enables learners to spot the signs of labour exploitation, understand their rights in the workplace, and know where to seek help if they or others are at risk. The qualification also covers job adverts, payslips, and contract types, arming learners with the knowledge they need to keep themselves safe in the working world.

The qualification is relevant to learners of a variety of ages and backgrounds, from college students preparing to enter the workplace for the first time, to adults returning to work after a hiatus. Those who have benefited from the qualification so far include asylum seekers and other vulnerable individuals from ethnic minorities. The qualification is also being used in Leicester, to tackle labour exploitation in the textiles garment industry.

The qualification can be delivered online, in the classroom or the workplace and can be used to support the delivery of ESOL courses, where learners are particularly vulnerable to exploitation.

As the annual celebration of excellence in the awarding and assessment industry, the FAB Awards is a prestigious event, and provides a high level of recognition for the winners.

“All of us at the Skills and Education Group are immensely proud to win the Collaboration of the Year Award. This award provides further recognition for a ground-breaking and important qualification that is having a real impact on individuals and communities. Many learners have already benefited from the qualification, and I am confident that it will continue to be a powerful preventative tool against labour exploitation and modern slavery.

“I would like to say a huge thank you to our colleagues at the GLAA, the University of Nottingham Rights Lab, Boston College, and all the other organisations who have helped to develop or deliver the qualification. This award is as much yours as it is ours.”

"We are absolutely delighted to have won this prestigious award which is testament to our continued successful partnership with the Skills and Education Group, as well as other key partners. Our workers’ right qualification is reaching communities potentially at risk of exploitation and underpins our prevention first approach”.

You can find out more about the Level 1 Award in Workers’ Rights and Labour Exploitation via the link. You can also gain an insight into the development and impact of the qualification through video on YouTube.