A London-based gangmaster who placed her workers in poor and overcrowded accommodation, paid them less than the legal minimum wage, withheld their holiday pay and attempted to deceive GLA inspectors, has had her licence revoked with immediate effect.

Seven adults and a small child were found to be sleeping on mattresses on the floor in a three-bedroomed property, in Coxwell Road, Plumstead, rented out by Mrs Tajinder Singh to workers registered with her company, The Superior Service Co Ltd.

And there were 10 adults and two children living in another of Mrs Singh’s three-bedroomed rental properties in Ceres Road. When interviewed the company director and landlady denied owning any houses, or renting them to her workers.

The Superior Service Co, of Plumstead High Street, became the first business to have a licence suspended by the GLA last month. This new policy provides a swift response to serious breaches of licensing conditions and immediately prevents companies from trading.

When the full details of the inspection were collated by inspectors, the business was shown to have failed five different critical standards – though one is enough to result in a loss of licence.

The company provided food processing and packaging workers as well as agricultural labour to fresh produce companies and farms in Kent.

Steps have since been taken to find alternative accommodation for the workers involved, who have been found alternative employment directly with the farms they worked at or with other licence holders. 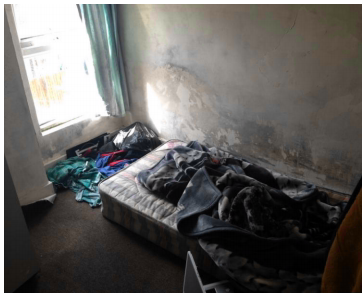 One of the bedrooms in the Coxwell Road house

GLA Chief Executive Paul Broadbent said: “With a remit to protect vulnerable workers, the GLA is satisfied with an outcome that removed those involved from being exploited, while dealing swiftly with the company responsible.

“Though a GLA licence requires the holder to comply with several strict standards, there was scant regard for a good number of them in this case.

“Workers were forced to live and travel in poor and cramped conditions and were denied payments to which they were legitimately entitled on a major scale.

“They were forced to fork out for Personal Protective Equipment required to do their jobs - which breached one licensing standard - and this fee took their pay below the National Minimum Wage, which broke another critical one.”

When the workers were questioned, all said they were denied all or some payments when they took leave. Further investigations at the company offices unearthed almost £250,000 worth of holiday entitlements, which had gone unpaid during the last two financial years.

Under GLA regulations, a score of 30 penalty points for a single critical breach can lead to a revocation of a licence. The Superior Service Co failed five critical conditions - plus two non-critical standards – resulting in a total of 166 points.

Mrs Singh’s licence was suspended on 16 May and revoked with immediate effect on 24 May. The Superior Service Co had until yesterday (10 June) to challenge the decision but no appeal was lodged.

1. The GLA operates throughout the UK and is a Non Departmental Public Body.

2. The authority was formed in 2006 in the wake of the Morecambe Bay cockle picking disaster when 23 Chinese workers drowned on the sands.

5. Under the Gangmasters Licensing Act (2004) it is illegal both to operate as, or employ the services of, an unlicensed gangmaster.