A gangmaster who brought Eastern European workers to the UK - paying them less than £2 an hour - has been jailed for five years for modern slavery offences. 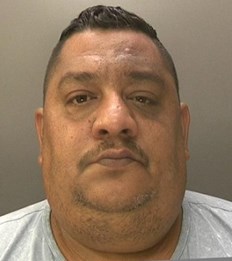 Mihai Varga (pictured) transported the men to work 12-hour shifts at a food processing factory in Staffordshire but pocketed most of their wages and handed over just £20 for a day’s work.

The five Romanian victims, men aged between 26 and 50, were also kept in cramped conditions in a room at his home in Ashwin Road, Handsworth.

The Gangmasters and Labour Abuse Authority (GLAA) worked closely with West Midlands Police, who arrested Varga at his home last September. The operation was part of a joint investigation between the police, the GLAA and the National Crime Agency.

He initially denied exploiting the Eastern European men but changed his plea during a trial at Birmingham Crown Court.

They victims have been safeguarded and are receiving support.

Michael Heyes, GLAA Investigating Officer, said: “Several of our specially-trained officers provided ongoing support before, during and after this large-scale and complex investigation and worked well in partnership with West Midlands Police to ensure justice was done for the victims.

“There are manipulative, devious and cruel men and women in every corner of the country right now exploiting workers for a handsome profit. Many victims aren’t aware that the majority of the wage they’re earning is going to their exploiter, or that they are entitled to holiday pay, sick pay or days off to rest. The basic rights you and I enjoy in our jobs are withheld from hard-working people who deserve better.

“People like Varga exploit those under their control mercilessly - the GLAA will continue to work closely with partners to ensure these people don’t go unpunished and that workers get what they’re entitled to."

Detective Constable Nick McCullogh, from West Midlands Police CID, added: "Varga cruelly made money from these victims while forcing them to work long hours and live in squalid conditions; we found they were staying in a small room and often having to share mattresses on the floor to sleep on.

"The victims were receiving around just £2 an hour and unaware they were being paid the minimum wage of £7 an hour. We believe Varga had been exploiting workers from Eastern Europe over several years and investigations to identify other victims is on-going.

"This is the 21st century and we are committed to tackling people trafficking and modern slavery. We are continually looking to raise awareness of what is still a hidden crime and need the help of the public if they suspect someone of being an unlicensed gangmaster."