Two men and a woman who exploited a vulnerable worker in South Wales have been given sentences totalling more than ten years. 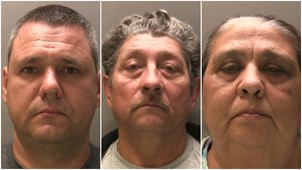 The trio kept the victim in a house in Newport against his will and forced him to work to pay off an ever-increasing “debt” while at the same time plundering his wages. Over an 11 month period they stole an estimated £10,000 from him and the most money he ever received was £20.

He was also stripped of his passport and bank cards, denied showers and clean clothes, and faced threats that his family would be targeted in his native Latvia.

Freibergs, 40, of Morley Close, Newport, was found guilty of requiring a person to perform forced or compulsory labour and arranging or facilitating the travel of another person with a view to exploitation. He was cleared of acting as an unlicensed gangmaster.

He was jailed for five years at Cardiff Crown Court on Friday October 28.

Stankevicius and Stankeviciene, who are husband and wife and both of Capel Close, Newport, were convicted of the same forced and compulsory labour offence.

Jacobus Stankevicius, 59, was given a four year jail term. Ruta Stankeviciene, 57, received a 20 month prison sentence, suspended for 18 months. She was also put under curfew until June 2023.

The case came to light when co-workers of the victim at the factory became concerned after noticing how little food he had and that he was wearing the same clothes every day.

The man was referred to the Gangmasters and Labour Abuse Authority (GLAA) by Avara Foods after he went to the company’s HR department and said he was “ready to talk”.

GLAA investigators arrested Freibergs, Stankevicius and Stankeviciene during an operation supported by Gwent Police in October 2018.

They denied any wrongdoing, claiming to have “felt sorry” for the victim and that they were only trying to help him.

The victim, now in his early 30s, was supported by the GLAA and entered the National Referral Mechanism, a government framework providing support for those who are trafficked and exploited for their labour.

GLAA Investigating Officer Laura Thomas said: “The victim was subjected to a life of misery by Freibergs, Stankevicius and Stankeviciene who ruthlessly exploited and enslaved him, purely to line their own pockets.

“Sadly this type of exploitation is all too common. Exploiters will trick vulnerable workers into coming to the UK with the promise of a good job and better life. The reality is that they end up becoming trapped in a cycle of debt and a life of abuse, unable to escape.

“We need all the help we can get in putting a stop to these heinous crimes and quite frankly grave abuses of fundamental human rights. If you have any information about workers being exploited in a similar way to how they were in this case, please get in touch and report your concerns.

“Our priority from the outset was rescuing the victim and helping him on the long road to recovery. I am so pleased with his progress. He lives independently, has a stable job, wages he now receives, and real friends who do not exploit him.

“Most importantly, he now has a bright future free from his captors.”

DS Simon Thomas, of Gwent Police’s Modern Day Slavery Team, said: “Gwent Police are pleased with the sentence passed in this case. It takes a lot of courage to come forward as a victim of such a heinous and vindictive crime.

“Gwent Police fully supports the work led by partner agencies, in this case the GLAA, and we will always take the opportunity to investigate modern slavery matters, prosecuting offenders where possible whilst providing safeguarding opportunities for victims.”

Andrew Brodie, People and Communications Director at Avara Foods, said: “We are delighted that we have been able to play a part in identifying this hideous crime, bringing the perpetrators to justice and providing meaningful support to the victim.

“When we say that modern slavery has no place in modern society we mean it: this result is proof that our checks and controls, and close relationships with enforcement agencies, are well established and effective.”

If you believe someone has been exploited for their labour, please contact the GLAA’s intelligence team on 0800 4320804 or email intelligence@gla.gov.uk.

You can also contact Gwent Police by calling 101 or by using their online reporting form.