A modern slavery victim exploited and abused by two men and a woman says he remains too scared to return to Wales.

The victim, now in his early 30s, said the actions of Normunds Freibergs, Jacobus Stankevicius and Ruta Stankeviciene meant he now struggled to trust people for fear of them taking advantage of him.

His exploiters forced him to pay off an ever-increasing debt while at the same time pilfering his wages.

They also stripped him of his passport and bank card, stole parcels sent from family members, and denied him clean clothes. 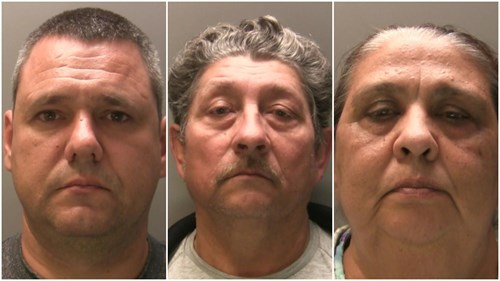 Freibergs, 40, of Morley Close, Newport, was jailed for five years after being found guilty of requiring a person to perform forced or compulsory labour and arranging or facilitating the travel of another person with a view to exploitation.

He was cleared of acting as an unlicensed gangmaster.

Stankevicius, 59, was jailed for four years for the same forced or compulsory labour offence and his wife Stankeviciene, 57, also of Capel Close, Newport, received a 20-month prison sentence, suspended for 18 months. She was also put under curfew until June 2023.

In a statement read out on his behalf at Cardiff Crown Court on Friday October 28, the victim said he came to the UK in 2017 to secure a better life for himself and his family back in Latvia who were living with no heating and poor food.

He said: “My father had contracted tuberculosis and the conditions he was living in were not helping his illness. I wanted to earn more money so I could send it home to help him.

“The fact that I could not send money home while I was working in South Wales contributed to my dad’s illness getting worse and so bad that he could not work.

“I haven’t forgotten what they did to me, and I am still too scared to return to Wales.”

His co-workers at a poultry processing factory run by Avara Foods in Abergavenny became concerned after noticing how little food he had and that he was wearing the same clothes every day.

He was referred to the Gangmasters and Labour Abuse Authority (GLAA) by Avara after he went to the company’s HR department and said he was “ready to talk”.

GLAA investigators arrested Freibergs, Stankevicius and Stankeviciene during an operation supported by Gwent Police in October 2018.

The victim has been provided with specialist support by the GLAA for the last four years.

He is now doing much better, with a job in another part of the UK.

“My life is now so different than when I was living in South Wales,” he added.

“I have the freedom to go wherever I want and when I want. I have all my wages which means I can send money home to my father and family and rent my own flat. I can cook whatever I want, and I also have a girlfriend. I am doing English lessons to improve my language skills so I can get better jobs and I am also going to college part time studying hospitality.

“The freedom I now have makes me happy, but I will never forget the bad times and what happened to me.”