Trafficking gang jailed for total of more than 20 years

Five members of a Plymouth family have today been jailed for a total of 20 years and six months following the first prosecution for human trafficking offences in Devon and Cornwall.

The two men and three women, all members of the same extended family and of Czech origin, were convicted by Plymouth Crown Court. 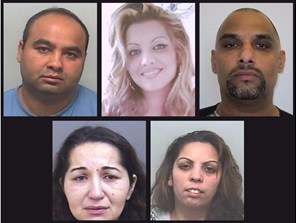 Tancosova and Petr Tancos were also found guilty of requiring a person to perform forced labour between 2010 and 2014.

Tancosova was further convicted of acting as a gangmaster without a licence between January 1, 2010, and September 16, 2014, where she supplied workers to a processing and packaging factory. She received a 16 month sentence for this offence to run concurrently.

The police inquiry commenced after they were presented with a profile of the group by the Gangmasters Licensing Authority’s intelligence team who had completed detailed development work concentrated on their activities.

All five were arrested following the largest operation of its kind by Devon and Cornwall Police and partner agencies which saw seven male victims freed from modern slavery conditions at Plymouth addresses.

The court heard that the five entered into a criminal agreement to traffic other Czech nationals into the UK for the purpose of labour exploitation and for their own financial benefit. They actively recruited and transported the most vulnerable and easily targeted members of society, including those with nomadic lifestyles and addictions, and those without regular work or close family.

Seven victims were flown into the South West under the false pretence of being given a better life and were housed across Plymouth. The court was told that the exploitation took many forms with the family taking control of the victims’ finances, both wages and benefits, as ongoing payment for bringing them to the UK for rent/board.

Victims worked long hours at local car washes and factories in jobs organised by the family but only received the equivalent of pocket money from their wages. One victim received £20-30 per week from a £250 wage on the pretext that it was expensive to live in the UK.

The men were forced to live in conditions well below acceptable standards within the family homes, such as sleeping on the floor, in garages, in corridors, or in a cupboard under the stairs [pictured below], and with inadequate bathroom facilities. 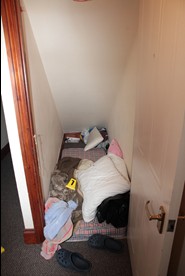 They were forced into domestic servitude to keep the family homes clean and made to undertake demeaning tasks. One victim was forced to spend six to seven hours cleaning a car with a small cloth and a baby bath, while another was made to cut the grass with a vegetable knife.

In one of the addresses, a sign was posted demanding victims pay £1 to use the toilet. One victim, a 57-year-old man, was trafficked from Prague into Plymouth by a woman pretending to be his girlfriend. She left after three days and he was taken in by one of the family members before being put to work at a meat processing factory.

Colleagues were so concerned about his appearance that they fed him with sandwiches from the vending machine at the end of the day. He slept on the floor at one of the addresses and received just £30 of his wages per week; he was not allowed to use the family bathroom and was forced to go to the toilet in the garden or in local cafes in Mutley Plain.

Detective Chief Inspector Stu Cavin, of Devon and Cornwall Serious and Organised Crime Branch, said: “The victims could have left at any time but often stayed because they either felt their old life was worse, were too frightened to leave or could not afford to. They had no idea of UK culture or where they even were in England, spoke little English and were oblivious as to how much they should earn here.

“The family created an environment where the victims were wholly dependent on them for shelter, food and work, and on occasions physical violence and threats were made to them and their families in the Czech Republic unless they behaved. One of the victims was hit with a baseball bat while others were hit and slapped.

“In contrast the defendants lived a lifestyle that they would not have been able to afford on benefits and they were happy to exploit those staying with them by obtaining and spending their money.”

Ian Waterfield, Head of Operations for the Gangmasters’ Licensing Authority, added: “Exploiting others for a financial gain is an abhorrent practice and the way it was carried out in this case was deeply unpleasant, showing scant regard for the health and welfare of the victims involved. Extremely vulnerable people were preyed upon mercilessly and treated no better than animals while their hard work banked their controllers some handsome profits.

“I am particularly proud that our work in partnership with Devon and Cornwall Police has helped secure convictions in this case. Given the despicable way these criminals operated, the custodial sentences imposed were the only rightful option and they are justly deserved.”

Shortly after the GLA contacted the police about the group, a man from the Czech Republic also came forward and claimed he had been trafficked into the UK and forced to provide labour for little or no money.

A long-term investigation began and, in September 2014, a series of co-ordinated warrants were conducted at addresses in Plymouth and Bodmin.

The operation involved more than 200 staff from police, Plymouth City Council, the National Crime Agency, the Gangmasters Licensing Authority, The British Red Cross, The Salvation Army and the Department for Work and Pensions.

Seven adult men and 13 children (linked to the defendants) were rescued and taken to a reception centre, provided by Plymouth City Council, where they were given medical care, proper food and sleeping accommodation, supported by the Salvation Army. The victims gradually began to talk to police about their experiences and understand that they had been exploited.

The subsequent investigation saw Plymouth detectives travel to the Czech Republic to work with Czech Police and Europol to help bring the family gang to justice.

DCI Cavin added: “Through this operation and subsequent prosecution we disrupted a well-organised callous family gang who promised vulnerable victims a better life but instead subjected them to appalling, oppressive and subhuman conditions for their own benefit. The deprivation of liberty displayed in this case is truly shocking – the idea that one human being is inferior to another is deplorable.

“The fantastic outcome is that all of the victims are now safe, some back in the Czech Republic and others in Devon and Cornwall, working and living independent lives free from the mental and physical shackles of oppression.

“The 57-year-old victim elected to remain in the UK; he is working and has access to all of his own wages. He has undergone a complete physical transformation and is very happy. He showed one of the investigation team his wallet which contained his wages and you would have thought that he had won the National Lottery. He says he feels as ‘free as a bird’.

“We are pleased with today’s verdict and I would like to commend the investigation team and the Crown Prosecution Service for their hard work and dedication. This has been a complex and meticulous enquiry with fantastic support from Europol and the Czech Police and they have worked tirelessly to bring this ruthless family to justice.

“The scale of the operation demonstrates that police and partner agencies are committed to tackling the exploitation and trafficking of workers in Devon and Cornwall as well as targeting those who seek to gain from others’ suffering.

“Our priority is to safeguard the victims of human trafficking and modern slavery while sending a strong message that Devon and Cornwall will not tolerate this type of criminality.

“We want to encourage victims of human trafficking and slavery, and anyone who may be aware of, or suspect such activity, to come forward to police and report offences with the confidence that it will be taken seriously.”

Ann Hampshire, Senior Crown Prosecutor for the Crown Prosecution Service South West Complex Casework Unit, said: “These defendants are guilty of the organised exploitation and manipulation of a number of vulnerable victims over a prolonged period.

“The group cynically targeted vulnerable people from the fringes of what could be regarded as mainstream society. These were people who perhaps might not immediately be noticed as missing.

“Their victims were trafficked into the UK, where they were then treated as commodities to be used however the defendants saw fit. They were forced to live in squalid and inhumane conditions, whilst being put to work to pay off imaginary debts they were told they had incurred.

"‎Through a mixture of persuasion, coercion and outright threat, they were denied the most basic of human rights. Those who seek to demean and exploit others in this way should be in no doubt that we will do everything in our power to bring them to justice.

“I would like to thank all those who have supported the prosecution of this case. This has been a challenging and complex matter to investigate and prosecute, requiring international co-operation between criminal justice agencies in the UK and the Czech Republic.

“This multi-agency, international approach helped us to build a strong prosecution case, ultimately resulting in today’s convictions. We hope that the victims in this case will take some comfort from seeing their abusers brought to justice."