Potential slavery victim rescued 'after living in shed for 40 years'

A potential modern slavery victim, who investigators believe has been living in a six foot shed in Cumbria for the last four decades, has been rescued by the Gangmasters and Labour Abuse Authority (GLAA). 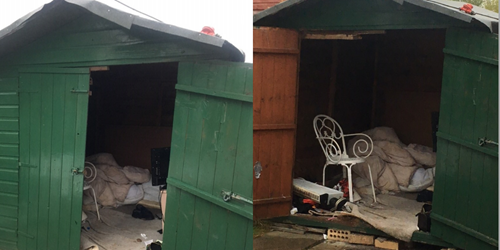 GLAA officers attended a fixed residential site north of Carlisle to carry out the dawn raid and recover the 58-year-old British man on the morning of Wednesday 3 October.

The potential victim was taken away from the address. He is receiving ongoing support and is doing well.

GLAA officers arrested a 79-year-old British man on suspicion of modern slavery offences. He has been released under investigation as enquiries continue.

The operation was supported by specialist officers from the National Crime Agency, the Cumbria Housing Department who are investigating possible health and safety breaches, and officers from Cumbria Police.

Modern slavery exists in a whole range of forms across the UK. If you suspect someone is being exploited or abused, please do not hesitate to get in contact with us. Your call could be the difference between exploitation continuing and worsening or a victim being rescued and given the support that they desperately need.