A modern slavery officer who meticulously investigated a case of trafficking and forced labour against two brothers, has received a prestigious award. 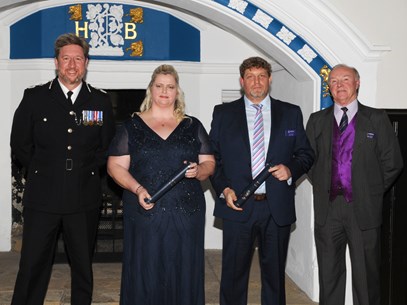 Helen Miller, an Investigating Officer at the Gangmasters and Labour Abuse Authority (GLAA), was handed a judge’s commendation at a ceremony organised by Norfolk Police last night (Thursday 15 March).

She was praised for her dedicated work on a case which spanned two years, involving sensitive and regular contact with the vulnerable victims, brothers from Lithuania.

Working in partnership with Norfolk and Suffolk Constabulary, her tenacity and commitment led to two Lithuanian men, Konstantin Sasmurin and Linus Ratautas, being jailed for a total of seven years in January 2016. They were extradited back to their country in January 2017 after serving part of their sentence.

Helen’s work began in September 2013 when a labour user contacted the GLAA with concerns over some workers they thought may be being exploited.

She said: “They were trafficked to the UK after being promised work and a place to live. But the reality was very different – they were forced to work very long hours at a food processing site and lived in appalling conditions in a house with mold on the walls and no beds.

“They didn’t have clothes or food and received just £20 for four months’ work they – they were told they owed money for travel, accommodation and electricity, so their wages went straight to their exploiters.”

The victims were threatened not to tell anyone about their situation and feared being ‘fed to the crabs.’

Helen added: “It was very difficult – they were understandably scared of those who had been controlling them, and frightened of the consequences. They knew what was happening to them was wrong and that they were being exploited and abused, which is why they found the courage and strength to to tell me what had happened to them.

“Victims of trafficking and modern slavery are often very distrusting of authorities too, so it took a considerable amount of care and time to gain their trust and support to go forward with the case. They were adamant that no one should go through what they had endured.”

A joint investigation between the GLAA, Norfolk Constabulary and Suffolk Constabulary was launched and the men pleaded guilty to trafficking people into the UK for the purposes of labour exploitation plus money laundering offences.

Helen said: “It is an honour to receive an award that recognises dedication and commitment to help tackle modern slavery and trafficking of victims.

“Working closely with Norfolk and Suffolk Constabulary was essential in order to secure a positive result for the brave victims who remained adamant throughout that they did not want to see anyone else suffer as they did.

“With this conviction we are also able to secure the first ever Slavery and Trafficking Prevention Order relating to labour exploitation against the traffickers. Exploitation can have life-changing consequences for the victims and I am absolutely committed to doing everything I can to prevent it.”