Home Secretary Theresa May witnessed and welcomed the GLA’s latest move in the ongoing battle to remove worker exploitation from the food supply chain.

The document was signed by the: 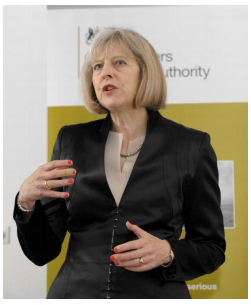 Commenting to an audience of suppliers and retailers, Mrs May (left) said: “This initiative between the Gangmasters Licensing Authority and key business partners is a vital step in tackling modern slavery in supply chains.

“Labour exploitation is much more common than any of us would like to believe. This is because it is a hidden crime - a hidden crime that involves trading in people’s lives.

“Buying and selling human beings as commodities, and keeping them in servitude, with little or no chance to escape. But today's event shows that businesses are becoming more aware of this issue and seizing the opportunity to address it.

“I am especially grateful to you because I do not underestimate the challenge, in this climate, of making this a priority for your businesses.”

Present at the event were senior representatives from major supermarkets: Marks & Spencer, Asda, Waitrose, Lidl, The Co-op, Sainsburys and Tesco, as well as senior management from suppliers Strawsons, Manor Fresh and Hammonds Produce. The initiative has also received the backing of Morrisons and Aldi.

Explaining more about the protocol, GLA Chair Margaret McKinlay (pictured below with the Home Secretary and GLA Chief Executive Paul Broadbent) said: “Intelligence is critically important to the work of the GLA and we know those in the supply chain have information and knowledge that can help us. 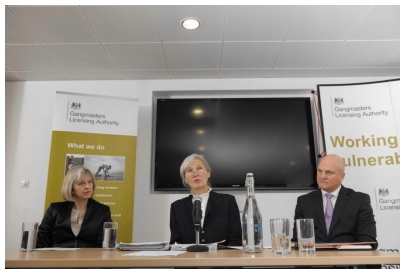 “That’s what this protocol agreement is all about. We’ve worked with all parties involved – retailers and suppliers – to put this agreement in place. It will be a living document that will continue to evolve and will make a real contribution to reducing any exploitation in the supply chain.

“It sets out how the GLA will work with retailers, suppliers and other organisations not covered by the Gangmasters Licensing Act with the overall aim to protect vulnerable and exploited workers.”

The signing of the protocol document - entitled Transparency in the Supply Chain - took place in London yesterday afternoon at the headquarters of the Recruitment and Employment Confederation (REC).

FDF Employment and Skills Director Angela Coleshill said: “We are fully supportive of the Supplier/Retailer Protocol which underlines our members’ commitment to stamping out forced labour. The refreshed protocol supports the GLA’s move to an intelligenceled approach, which will help hugely in the fight to drive out rogue labour suppliers from the UK market.”

Fresh Produce Consortium Chief Executive Nigel Jenney said: “The protocol is a clear commitment from those beyond the regulated sector to work together openly and effectively to stamp out modern slavery.”

BRC Director of Food and Sustainability Andrew Opie said: “This is a further demonstration of retailers’ commitment to work with their suppliers and beyond to ensure the GLA has the most effective information possible to assist in targeting its enforcement.”

REC Chief Executive Kevin Green said: “The REC has a strong relationship with the GLA and the Home Office, and a shared commitment to eradicating worker exploitation from labour supply chains. We strongly support Theresa May’s plan for an anti-modern day slavery bill to address the infiltration of the UK’s labour market by criminal gangs and human traffickers.

“It’s important that regulators, employers and recruiters work collaboratively to create greater transparency and accountability within supply chains. The REC and our members recognise the key role that our industry plays in ensuring safe recruitment practices are maintained. We will soon be issuing guidance to our members to help them identify and report issues of exploitation so this criminal activity can be eradicated once and for all.”