Victim alleges he has been forced to work for six years

A suspected modern slavery victim who claims he has been living in an attic room and forced to work for the past six years has been discovered by Gangmasters and Labour Abuse Authority investigators during a dawn raid in Oldham today.

The Hungarian national, in his late 50s, alleges he was sent to perform work in a food processing factory and collecting scrap metal but had no access to the wages paid into his bank account.

Assisted by officers from Immigration Enforcement and Greater Manchester Police three arrests were carried out (pictured below) at two addresses in Oldham for possible offences under the Modern Slavery Act.

A 22-year-old man and a 23-year-old woman – both originally from Hungary – were arrested at a property in the Greenacres area, while a 60-year-old Hungarian male was apprehended at a separate address nearby. 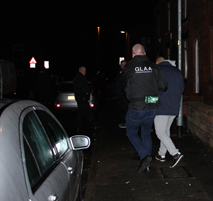 Senior Investigating Officer Martin Plimmer said: “This appears to be another case of opportunists preying on vulnerable fellow countrymen and exploiting them for their labour.

“While we are still in the very early stages of this investigation we appear to have uncovered two victims – one of whom claims to have been exploited for a considerable period of time.

“Working with the local police and immigration officers we have been able to arrest the suspects and will now seek to gather evidence to ensure that justice is done.”

Inspector John Harrison, from the Manchester Immigration, Compliance and Enforcement Team, said: “All Immigration Enforcement officers are trained to identify potential victims of modern slavery and trafficking. Our front line role means we are ideally placed to identify where someone may have been trafficked and refer these cases for further action.

“Today’s operation sends a strong message and we will continue to work with law enforcement partners like the GLAA to tackle those who seek to exploit vulnerable people.”

The operation was organised after concerns were raised by supervisors at a food production factory about the condition of a 66-year-old male who was being driven to and from work by one of the suspects.

He has since been interviewed by GLAA officers and relocated from the Oldham area after agreeing to enter the Government’s National Referral Mechanism (NRM) for Potential Victims of Trafficking.

The three suspects will be questioned today while the alleged victim will be interviewed assessed as a candidate for entering the NRM.

Enquiries are continuing and no further information will be released at this stage.