Boston College students taking part in a pioneering course with the Gangmasters and Labour Abuse Authority (GLAA) have showcased their work to some of the world’s leading experts on modern slavery and labour exploitation. 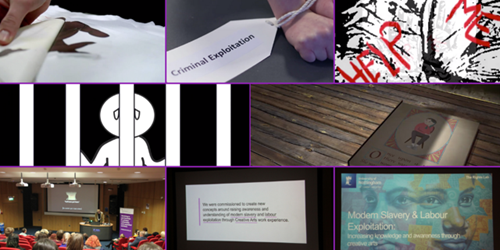 Students from the college presented their visual concepts for raising awareness of labour abuse at an event hosted by the University of Nottingham’s Rights Lab on Monday 21 January.

The concepts included everything from videos to photography, graphic design, and even clothing, all of which featured in a four-minute showreel played at the event.

They were also given an exclusive insight into the work of both the GLAA, the foremost investigative agency for tackling labour exploitation, and the Rights Lab, home to the world’s leading modern slavery experts who have developed an advanced research agenda focused on eradicating slavery by 2030.

Boston College is the first college in the UK to work with the GLAA on embedding the subject of labour abuse across its range of academic and vocational courses.

As part of the project, the college’s 1,500 full-time students will all have a tutorial on workers’ rights and spotting the signs of modern slavery during this academic year.

A Rights and Responsibilities Week was held in October and November 2018, with ACAS, the Salvation Army, Citizens Advice, local employers and community groups delivering practical sessions designed to provide students with knowledge about the signs of labour exploitation.

The project has also been publicly endorsed by the Minister for Crime, Safeguarding and Vulnerability Victoria Atkins, Lincolnshire Police and Crime Commissioner Marc Jones, and Boston and Skegness MP Matt Warman.

Boston College Advanced Practitioner Kaley Boothby said: “We are delighted to work the Rights Lab at the University of Nottingham. This project to raise awareness of the issues of modern slavery and labour exploitation has been an important part of the college’s work this year and this visit was a chance to see the project in the wider context of human rights abuses and actions.

“The project has been wide-ranging and it has been fantastic to see all parts of the college benefiting from the project’s different strands with the result that both staff and learners have increased their understanding and awareness of the issues.

“It is vital that we raise the aspirations of our learners by providing opportunities to experience higher education and different perspectives on our world so it is great to be able to visit a local university and see first-hand their research activities."

GLAA Director of Strategy Darryl Dixon said: “We are delighted with how the students have embraced this whole project, producing a range of work which they should justifiably be proud of.

"Their work will provide an invaluable resource for our organisation in helping us to spread the word about the fight against labour exploitation, especially with a younger audience as a lot of their concepts are perfectly suited to social media.

“But this project is quite clearly about a whole lot more than that. We are confident that the course has broadened their understanding of modern slavery and labour exploitation. This is particularly important as they are the workforce of tomorrow and will be able to use their extensive knowledge to help create workplaces free from exploitation in the future.

“We are also fully committed to ensuring that this ground-breaking project has the biggest impact possible across the whole country. At the end of the course, we will make a range of educational resources freely available for all other UK colleges and post-16 education providers."

Nathalie Walters, Rights Lab Head of Operations, said: “It was fantastic to see the work produced by the students. They have come up with some great ideas for raising awareness about modern slavery and labour exploitation, which shows that they have gained a real knowledge and understanding of these complex issues.

“I hope further education providers learn from what Boston College and the GLAA have achieved together, as raising awareness is one of the keys to helping to prevent modern slavery and labour exploitation.”