The International Labour Organization and the Gangmasters Licensing Authority   have signed a letter of intent to strengthen their collaboration on tackling abusive recruitment practices that trick workers into modern slavery and forced labour.

Guy Ryder, Director-General of the International Labour Organization (pictured left) and Paul Broadbent (right), Chief Executive of the Gangmasters Licensing Authority (GLA) signed the agreement in the presence of representatives from the Home Office, the Confederation of British Industry and the Trades Union Congress. 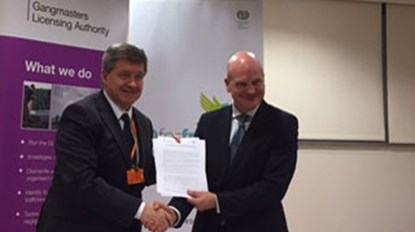 Minister for Vulnerability, Safeguarding and Countering Extremism, Sarah Newton said: “The Government is determined to eradicate modern slavery, it is a barbaric crime which destroys the lives of some of the most vulnerable in our society.

“I welcome the commitment from these two organisations to combine their efforts, it sends a strong message to perpetrators that we will not tolerate any form of exploitation.

“The Government has extended the remit and strengthened the powers of the GLA to prevent, detect and investigate worker exploitation across the entire economy. We have also appointed Sir David Metcalf as the first Director of Labour Market Enforcement to oversee a government crackdown on exploitation in the workplace.”

The ILO and the GLA have been collaborating closely in the fight against fraudulent and abusive recruitment practices, forced labour and trafficking in persons over the past few years.

In the framework of the Fair Recruitment Initiative led by the ILO and supported by the ITUC and the IOE, new “General principles and operational guidelines for fair recruitment” were launched in September 2016, and have been recognized widely as an international benchmark on how to address the issue.

“Tackling abusive recruitment practices is key in effectively preventing modern slavery and forced labour nationally and across borders. The GLA’s work has changed how the regulation and monitoring of labour recruiters is carried out in the UK. It is a model which can inspire other Governments on how to implement the Fair Recruitment Principles and Guidelines” said Guy Ryder.

Following the adoption of the UK immigration Act 2016, the GLA has been given new powers, including the possibility to investigate modern slavery offences related to labour exploitation, with increased powers of arrest, search and seizure of evidence of labour abuse. The GLA will be able to investigate across the entire UK labour market, and not solely in the fresh goods and related processing and packaging sectors as before.

“These extended powers will help us pursue our goal to protect vulnerable workers from being exploited in the UK“ said Paul Broadbent. “Strengthening our collaboration with the ILO will provide the opportunity to share the experience we have gained and contribute to training programmes and tools to increase reporting and identification of forced labour and abusive labour practices across supply chains”.

Cooperation between the GLA and the ILO will also contribute to raising awareness on the Modern Slavery Act’s transparency provisions which require companies to ensure that human trafficking is not taking place in any of its supply chains. The ILO Protocol to the Forced Labour Convention also promotes due diligence by both the public and private sectors to prevent and respond to the risks of forced labour.

“The fact that in today’s world there are still children, women and men in modern slavery, is an affront to all people and nations everywhere. We all have a role to play to eliminate it once and for all. Social partners are a central piece of the equation, together with other valuable partners such as the GLA”, concluded Guy Ryder.