We’re continuing our investigation into an allegation of modern slavery in Croydon, South London.

Six potential victims were found living in poor, cramped conditions (pictured) at an address in London Road during a raid by the Gangmasters and Labour Abuse Authority yesterday (Wednesday 28 March).

A Polish national, 36, was arrested on suspicion of modern slavery, forced labour and labour exploitation and has been released under investigation as enquiries continue.

The alleged victims, all Polish nationals in their early 20s, had been working within the construction industry. They were offered support from a number of agencies.

The GLAA operation was supported by the Met Police Service, including its organised crime advisers.

Could you spot the signs of modern slavery? Read our useful information guide here http://bit.ly/GLAASigns.

If you have concerns about the mistreatment of workers or labour exploitation, call the GLAA on 0800 432 0804 or speak to our intelligence team on 0115 959 7052, or by emailing them at intelligence@gla.gsi.gov.uk. 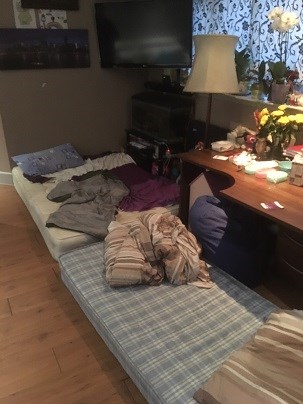