Minister for Modern Slavery Karen Bradley has promised a proposed Government review of the GLA’s role and remit would ensure the authority targeted the ‘right’ businesses. In her keynote speech at the GLA’s inaugural national conference in Derby on Monday, the Staffordshire MP said the Government needed to ensure any changes made to the authority would be effective and based on ‘best evidence’. 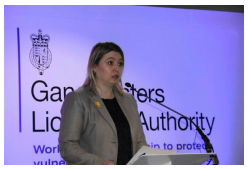 “There is a shared desire to see what more we could do with the GLA’s expertise and how we could use its knowledge and skills to tackle the scourge of Modern Slavery.

“In support of this, there have been many calls to extend GLA licensing into new sectors including care, construction and hospitality.

“We very much welcome the interest in seeking to improve the GLA’s role but we need to be clear about the most effective changes and make sure that they are based on the best evidence available.

“As a Government, we recognise that some of what we ask of you can seem to be bureaucratic and burdensome, when for so many of you, are highly compliant and treat their workers fairly.

“So we want to make sure that we target the ‘right’ businesses, the ones who break the law, the ones who exploit their workers and the ones who subject them to servitude and slavery.”

Mrs Bradley said that was why the Government had announced last week that if her party formed the next Government after the General Election, they would carry out a full public consultation into the role of the GLA.

Independent Anti-Slavery Commissioner Kevin Hyland (below) made the other keynote speech at the conference and welcomed the Government announcement and urged any review to look at the powers of the GLA. He added: 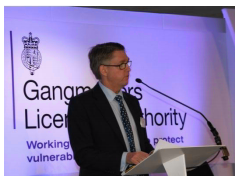 “As Commissioner I very much support this and I will be looking to the consultation to come up with concrete actions for how we go forward. “And there is also a clear case for looking seriously at increasing the licensing powers of the GLA to allow the agency to inspect forced labour.

“The GLA currently can only prosecute for being an unlicensed gangmaster. I am aware of recent examples where the GLA have produced files on cases of exploitation and handed them to the police, who of course do have the power.

“But the cases haven’t been acted upon. I will be working to ensure that this situation does not continue.”

GLA Chief Executive Paul Broadbent told the conference that the authority was ever-hungry for more information on rogue operators and unlicensed gangmasters. 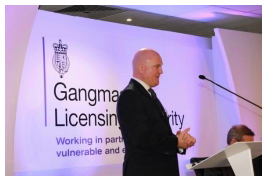 “We can never have too much information and our advice will always be to call us if you suspect anything is wrong,” he said.

“Don’t assume someone has already told us or that we already know. We’d rather be told twice than not at all. “And please be assured that we will not ‘shoot the messenger’.

The GLA will always endeavour to work with people to clean up our sector and will not seek to incriminate those who are trying to help and inform our work.”