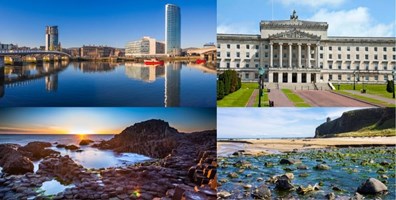 The way in which the GLAA operates and the partners we work with vary slightly in Northern Ireland.

In England and Wales, the GLAA has responsibilities to investigate reports of Modern Slavery in all industry sectors.

In Scotland, the primacy for this lies with Police Scotland but the GLAA support this activity to target, dismantle and disrupt serious and organised crime.

In Northern Ireland we operate under The Gangmasters (Licensing) Act 2004 tackling worker exploitation, tax evasion and health and safety negligence.

If you are an employment agency, labour provider or gangmaster who provides workers to the sectors listed below, you will need a GLAA licence:

Find out more about GLAA licensing

Forced and bonded labour and human trafficking offences are investigated by the Police Service of Northern Ireland (PSNI) at present and the GLAA assist where an offence has been committed in the regulated industry sectors.

The Department of Justice

The overall aim of the Strategy is to ‘Equip Northern Ireland to identify and eradicate modern slavery and human trafficking’. It outlines shared strategic outcomes, objectives and activities which are focussed on:

It is intended to move from an annual strategy to a three-year strategy, subject to NI Assembly agreement, to enable a more comprehensive framework for both short and long-term policy priorities. The 2021-22 Modern Slavery Human Trafficking Strategy can be found here: Modern Slavery and Human Trafficking Strategy for Northern Ireland 21-22 | Department of Justice (justice-ni.gov.uk)

Further information in Northern Ireland about human trafficking can be found via the link below:

You can report any concerns to the police about yourself or another person on 101 or if someone is in immediate danger, then dial 999.

The PSNI have a dedicated PSNI Modern Slavery and Human Trafficking Unit (MSHTU) . The responsibility of the MSHTU is to investigate organised crime involving cross jurisdictional human exploitation and assist in the identification and protection of victims of modern slavery and human trafficking. For more information about this specialised unit, go to the PSNI website Human Trafficking (psni.police.uk)

It doesn’t matter what age, gender, race or sexuality you are anyone can be a victim of Human trafficking.

You do not have to report concerns to the police - you can pass on information anonymously to the independent charities Crimestoppers on 0800 555 111 or the UK Modern Slavery Helpline on 08000 121 700.

Working in collaboration with national and international law enforcement and statutory agencies such as the GLAA working together we play a key role in combating human trafficking and modern slavery with regard to its prevention, detection, investigation and the recovery and protection of victims.

Safeguarding at the border

Frontline staff in Border Force Northern Ireland are provided with training in identifying potential victims of modern slavery, and guidance issued to staff sets out indicators of modern slavery, including forced labour. In addition, we also have a network of specially trained Safeguarding and Modern Slavery teams who receive classroom training focussing on the knowledge and skills needed for this area.

We work closely with partners and stakeholders in identifying and dealing with organised crime groups behind human trafficking and modern slavery under the umbrella of the Organised Crime Task Force.

The Public Prosecution Service (PPS) is the principal prosecuting authority in Northern Ireland, with responsibility for taking decisions as to prosecution in all cases investigated by the police. We also consider cases initiated or investigated by other statutory authorities, such as HM Revenue and Customs. We act impartially and in the interests of justice at all times, applying the highest professional standards and treating everyone fairly and with respect. We are at the heart of the criminal justice system and work with partners to build a safer community in which we respect the law and each other.

The PPS Code for Prosecutors sets out guidelines on the general principles to be applied in determining in any case whether criminal proceedings should be brought, what charges should be preferred and how prosecutions should be conducted.

Belfast and Lisburn Women’s Aid supports adult female victims including those with children and those who are pregnant as a result of their exploitation.

BLWA also supports the repatriation of women who wish to return to their countries of origin. In instances where Migrant Help receives a disclosure of domestic violence or sexual abuse from a female who is accompanying a male partner, the female is then referred to BLWA who will take responsibility for providing support.