The GLAA in Scotland 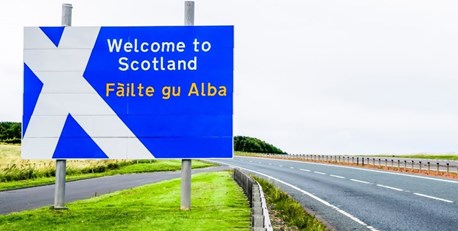 The GLAA is a national enforcement agency whose role is to protect workers from labour exploitation. Our licensing scheme regulates businesses who provide workers to the fresh produce supply chain and horticulture industry, to make sure they meet the employment standards required by law.

We investigate reports of unlicensed trading, worker exploitation and illegal labour provision, as well as offences under the National Minimum Wage and Employment Agencies Acts.

However, the way in which we operate and the partners we work with vary slightly in Scotland.

In England and Wales, the GLAA has responsibilities to investigate reports of Modern Slavery. In Scotland, the primacy for this lies with Police Scotland but the GLAA support this activity to target, dismantle and disrupt serious and organised crime.

Eliminating all forms of trafficking and exploitation and protecting people from harm continues to be one of Police Scotland’s top priorities. Engaging with victims and partner agencies including the Gangmasters and Labour Abuse Authority is key to developing our understanding of and response to emerging threats. We learn from their experiences and develop our approach and tactics to reduce re-victimisation, prevent more people becoming victims and to target those who exploit them.

Human trafficking is the illegal trade in human beings, both adults and children, for the purpose of commercial exploitation. Victims of human trafficking are often the most vulnerable members of a community however, there is no such thing as a typical victim.

Victims are also known to come from a number of continents such as Asia, Africa and Europe. They may arrive in your community after being kidnapped, smuggled or tricked by a friend offering a job and the opportunity of a new life, however soon discover that their lives are not their own and are forced into a life of exploitation with no way of escaping.

Trafficking victims are often forced into exploitative labour to pay back the debt that traffickers claim they owe them for travel, accommodation, recruitment fees, food, etc. Victims are trapped in this life with limited freedom or options. They regularly have their identity documents removed and are often subjected to physical and mental abuse, poor working conditions and a lack of health and safety precautions.

Human trafficking exists in communities across Scotland and can also involve people who are resident legally in the country. The illegal industry of trafficking people has become so sophisticated that it often goes unnoticed and assistance from the public is crucial to identify potential signs of human trafficking within your community. You can report any concerns to the police about yourself or another person on 101 or if someone is in immediate danger, then dial 999.

More information on human trafficking including how to spot the signs can be found at Police Scotland’s website: https://www.scotland.police.uk/

You do not have to report concerns to the police - you can pass on information anonymously to the independent charities Crimestoppers on 0800 555 111 or the UK Modern Slavery Helpline on 08000 121 700.

Working with the GLAA, partners, workers, businesses and the public Police Scotland will continue to pursue those who perpetrate the crimes of human trafficking and exploit other human beings for profit or benefit. Together we can break the chain.

The Human Trafficking and Exploitation (Scotland) Act was unanimously passed by the Scottish Parliament in 2015. The Act introduced a single offence for all kinds of trafficking for the first time. It raised the maximum penalty for trafficking to life imprisonment and gives police and prosecutors new tools to prevent and detect trafficking and bring those responsible to justice.

One of the requirements of the Act was for the Scottish Government to prepare a Trafficking and Exploitation Strategy and lay it before Parliament. The Strategy was published in May 2017 with a vision to eliminate human trafficking and exploitation. In order to achieve this, it sets out three action areas:

Since publication of the Strategy, a significant amount of work has been undertaken and more information on this can be found within the annual progress reports https://www.gov.scot/policies/human-trafficking/.

Further information about human trafficking can be found via the link below:

Guidance for businesses around supply chain risks/slavery and human trafficking statements can be found via the following link:

We hold the contract with the Scottish Government to provide support to all adult victims, except female victims of commercial sexual exploitation (supported by TARA), who have chosen to enter the National Referral Mechanism.

Once a client enters our service, they will work closely with a dedicated adviser, and will benefit from a tailored package of support.  A non-exhaustive list of some of the assistance on offer includes:

If you would like to get in contact with us, please use one of the following routes:

The TARA Service are funded by the Scottish Government to provide trauma informed support to women, over 18 years, where there are indicators of trafficking for commercial sexual exploitation and they are identified in Scotland.

We can be contacted 24/7 and work with women for around 12 -18 months dependant on their needs.  We can assist women to quickly access safe crisis accommodation, health services, legal advice, psychological assessment and treatment and can act as a First Responder to the National Referral Mechanism.  Our ongoing advocacy on behalf of women enables them to access mainstream supports whilst aiming to promote their independence and recovery through a rights based approach.  The TARA Service promote partnership working wherever possible and can provide awareness raising or training events to improve knowledge of human trafficking and identification of survivors.

Our remit covers a wide variety of safeguarding work, including human trafficking, modern slavery, FGM, forced marriage, honour based abuse and child sexual abuse and exploitation, working to increase awareness in these areas.

We cover ports and sea ports in the region, which includes tackling the problem of labour exploitation within the fishing industry, car washes, food production, hospitality and farming.

We work alongside our national team, but work closely with partners and stakeholders also, identifying and dealing with organised crime groups behind human trafficking and modern slavery.

We strive to work to put systems in placed to protect the vulnerable and those vulnerable to exploitation and work with devolved Government to contribute and shape policy in these areas.

Scotland Against Modern Slavery exists to help eradicate the atrocity of human trafficking and raise awareness across the Scottish business community of this evil trade.  Many food and drink manufactures, construction firms and logistics businesses have joined in order to share good practice, work with the government and support victims on their journey to become survivors.

The Worker Support Centre (WSC) is a new service hosted by JustRight Scotland (JRS) for workers on the Seasonal Worker visa in Scotland. Funded by the Scottish Government, the WSC provides information and support through our outreach support workers, project advisor and our legal team. The centre has two part-time outreach support workers who are themselves former seasonal horticultural workers who speak Ukrainian, Russian and Lithuanian. These support workers are the first point of contact for seasonal workers and engage directly with them to help them navigate a range of issues.

The WSC can be contacted via the following means:

In addition there is a programme of outreach and I attach the calendar for August.

The Crown Office and Procurator Fiscal Service (COPFS) is Scotland’s prosecution service. We receive reports about crimes from the police and other reporting agencies and then decide what action to take, including whether to prosecute someone. The published Prosecution Code sets out the test that prosecutors apply when deciding what action is appropriate in response to a report alleging criminality. COPFS also examines the circumstances of deaths that need further explanation and investigate allegations of criminal conduct against police officers. COPFS plays a pivotal part in the justice system, working with others to make Scotland safe from crime, disorder and danger. The public interest is at the heart of all we do as independent prosecutors.